The robotic art installation Bang!Bang! borrows its title from Nancy Sinatra’s song illustrating the duality of technological development. In the words of Armin Krishnan, the author of the book Killer Robots: “ Like in many other cases, high technology offers many opportunities, but also poses potentially grave dangers.”

While robots and AI are marketed to us as the most efficient technology, which will reduce human working hours and support dignified aging, there are different interests and agendas behind these developments. For example, the US Army Contracting Command has called on potential vendors in industry and academia to submit ideas to help build its Advanced Targeting and Lethality Automated System (ATLAS) so that it can “acquire, identify, and engage targets at least 3X faster than the current manual process.”

To put it in a nutshell, autonomous killbots are one possible reality. As Krishnan writes: “War would be inhumanely efficient and would no longer be constrained by the natural urge of soldiers not to kill, if it can be somehow avoided. Robots will do whatever they are programmed to do. If they were programmed to kill all enemy combatants, they will do exactly that.” (Krishnan 2009, 130) The autonomous killing process can be seen as disconnecting deeds and moral, so called ‘adiaphorization’ according to the sociologist Zygmunt Bauman. A war will be perceived like a videogame without the stress of murder.

But what is the feeling on the other side of the screen, on the battlefield with killbots? In this art installation, we aim to raise uncomfortable questions and speculate about possible realities. In a brutal way, the robot arm points at the audience with a 3D-printed gun (the latter refers to the ban of firearms blueprints in the US and an attempt to resolve with this act a huge problem of mass shootings and murders in this country). Bang! Bang! speculates about a possible future scenario in a very direct way placing the audience into the role of a potential target. It is better to simulate such realities in the art context rather than in the street when the real firearm is pointed to a human by an autonomous robotic agent. I guess none of us would like that the Robocop scenario will become reality (although it is quite close i.e. robot police dogs in NYC).

In the end, the artwork questions the ethics and morality behind the development and deployment of autonomous killer robots. And it tries to imagine for a second what kind of consequences could have inhumanly effective armed unmanned systems.

Exhibited:
– produced at DDTLab in frames of RUK residency in Trobvlje, Solvenia (March 2021) 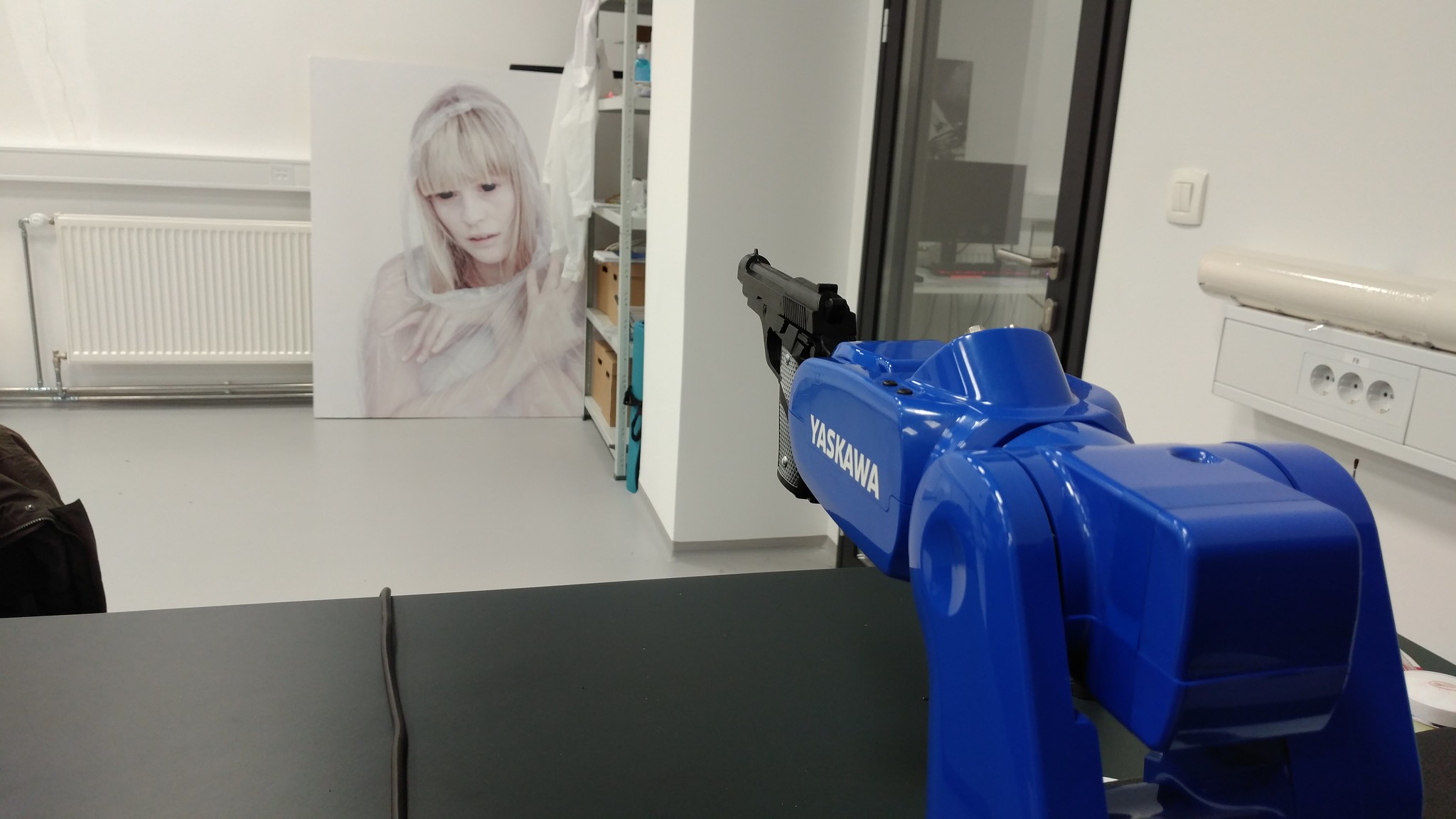